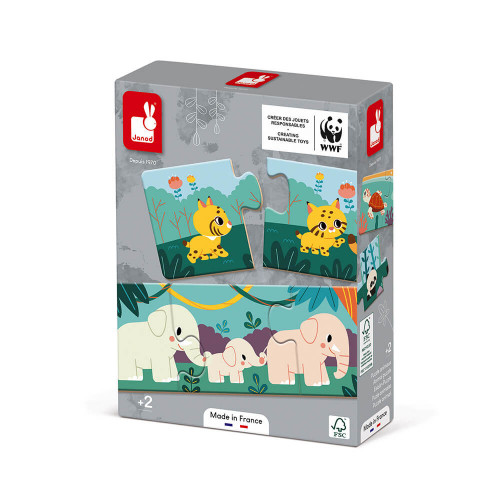 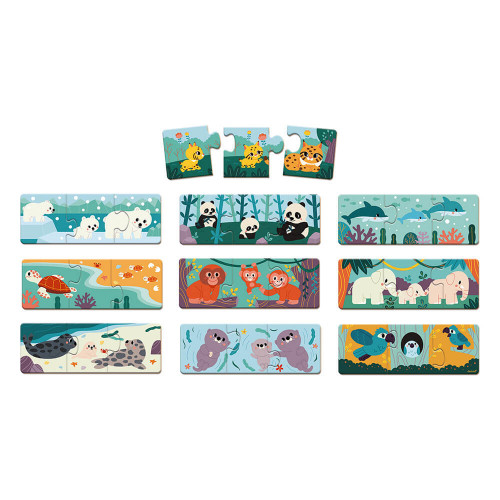 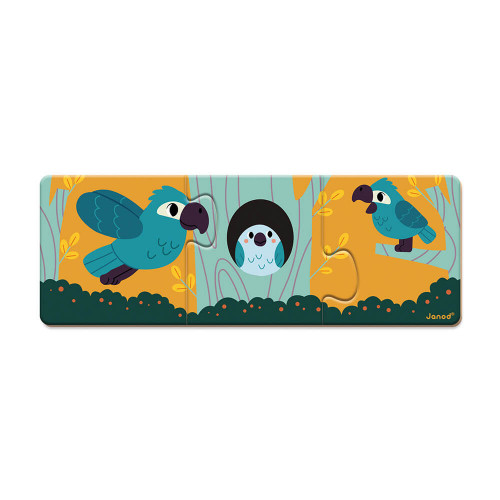 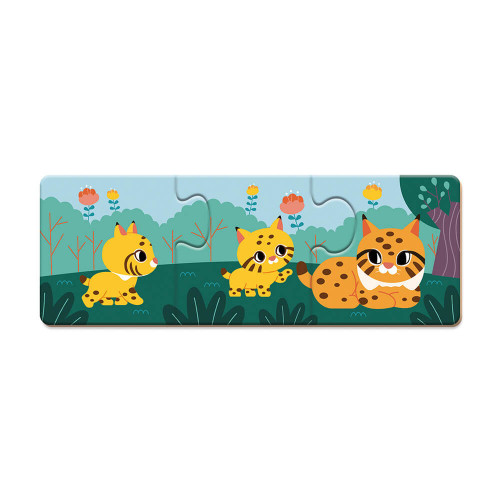 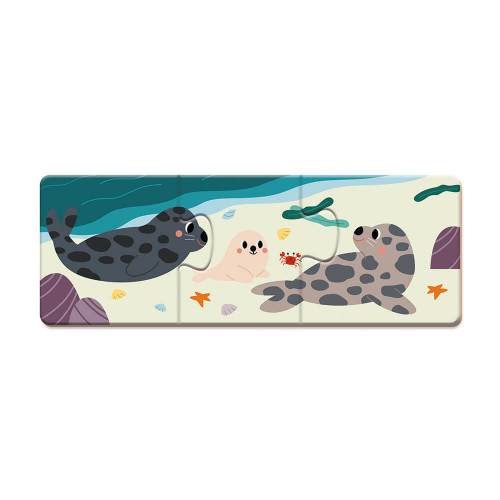 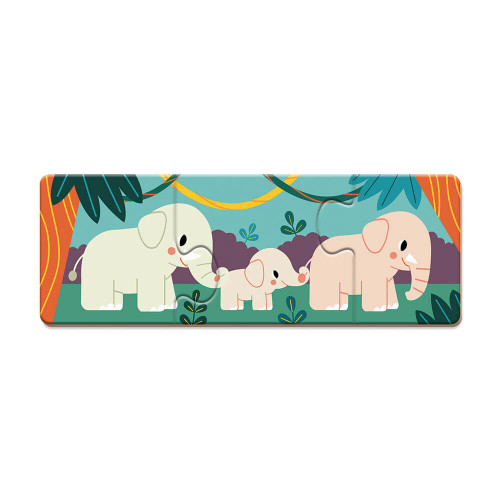 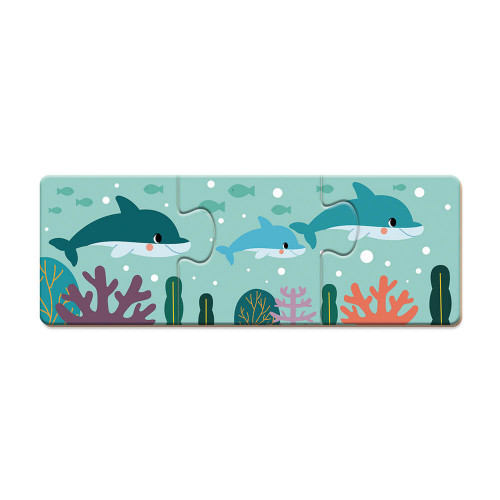 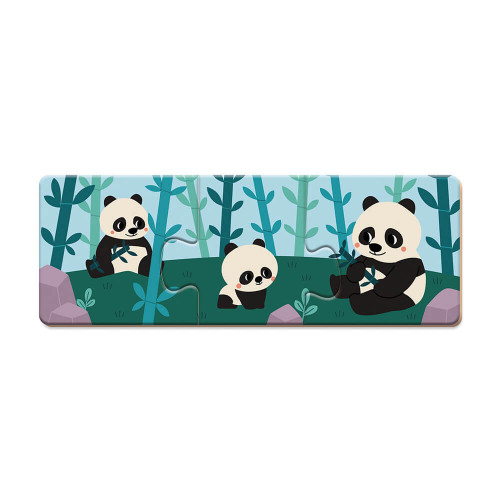 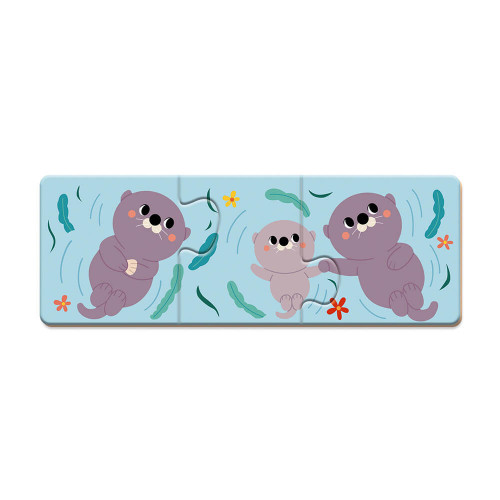 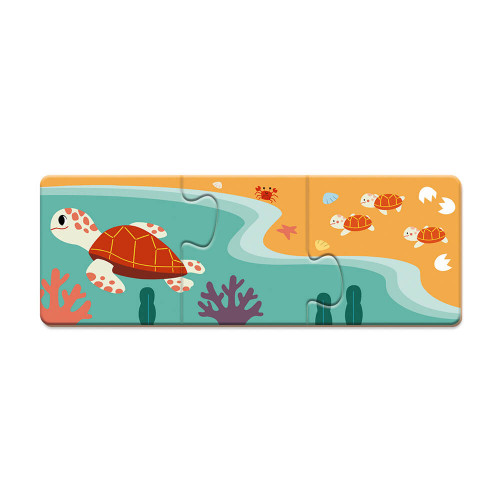 Colourful and original Toys, designed for children’s development through play.

Discover endangered animals with this pretty matching game in the form of an early-years puzzle. There are 10 pictures to put together by matching wild animals and their babies with their habitats. The stars of the show include a polar bear family on the ice and the mischievous monkeys in the jungle! This game for children aged 2 and over is ideal for developing your child’s fine motor and logical thinking skills. FSC®-certified and printed with vegetable-based ink. Made using wood from sustainably managed forests. Made in France. Toy developed in collaboration with WWF®. Janod is supporting WWF®™’s efforts to protect the environment and biodiversity with a new range of toys made from more sustainable materials. We hope this range will inspire the next generation and encourage them to stand up for wildlife and the natural world in the future.

Product info
Print the sheet
See also
Add this product to my list of favorites. Remove this product from my favorite's list. 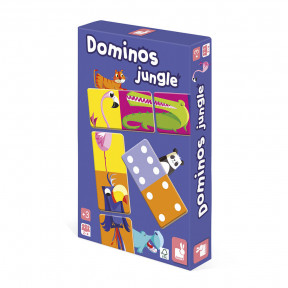 2 ways to play : -an illustrated side, to find and assemble both parts of each animal -a numbered side to teach and entertain young and old! From 2 to 4 players. Contains 28 giant cardboard dominoes (dims 13 x 6,5 cm / 5.1 x 2.6 in). Delivered in a suitcase with magnetic lid and fabric handle. Rules of the game : each player receives 5 dominoes. The remaining dominoes are reserved for the stack. To start the game, take a domino from the draw pile, flip it over and place it in the centre of the table. The youngest player starts. Simply arrange the dominoes one after the other, so that the animal head matches up its body. Whenever players cannot play a domino, they take one from the stack and can play again if the domino selected is playable. When there are no dominoes left in the stack, the player loses his turn. The first player who manages to place all of his or her dominoes is declared the winner. Remark : When playing with the dominoes animal side up, if no player can place a domino when the draw pile is empty, the game is then said to be blocked. The player who has the fewest dominoes in his or her hand shall be declared the winner. When playing with the dominoes number side up, if the game is blocked, then the player who holds the fewest remaining points is awarded those of the other player. 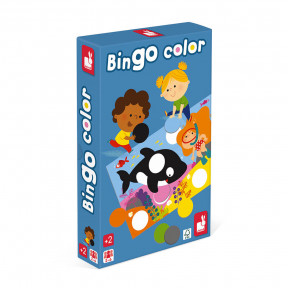 An ideal game to learn the colours while having fun! Each player chooses their bingo card and must try to be the first to fill it with the counters. Progressive game play, with an easy side illustrated by coloured circles for toddlers and a more difficult side with a lovely illustration to complete for older children. This game develops concentration and the sense of observation. 6 large cards, 60 cardboard counters and one cotton bag. From 2 to 6 players. Cards : 23 x 14 cm (9.05 x 5.5 in) / Counters : Ø 3,4 cm (Ø 1.33 in.). Rules of the game in French, English, German, German, Spanish and Italian. 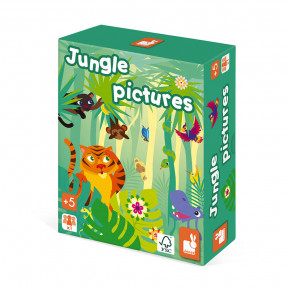 The animals in the jungle are struggling with some real brain-teasers! They need some help to solve 60 puzzles, spread over 3 difficulty levels. This game can be played solo or in a group, and is suitable for children aged 5 and over. The challenge is to find the right combination of animals, flowers and fruit by putting the hole cards in the right places. The solution is provided on each puzzle card. This game contains 5 hole cards and 60 puzzle cards. The hole cards are made of cardboard and the puzzle cards are made of thick paper. This game is FSC® certified (made using wood from sustainably managed forests). 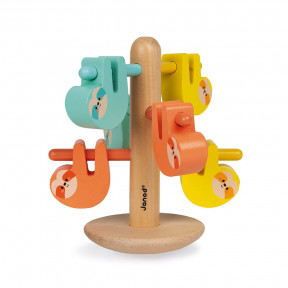 Wooden sloth balance and colours game - In partnership with WWF®

It's nap time for our friends the sloths! But be careful! Each one has to sleep on its own, colour-coded branch (blue, yellow or orange) and they all have to stay on their favourite rocking tree without knocking the others down! This original and attractive balance game will test the skills of children aged 2 and over. Which player will be the most careful? Who will work out how to match the sloths to the branches? This game develops dexterity and familiarises children with colours. FSC®-certified wood (from sustainably managed forests). Beautiful stand made of natural wood and water-based paint. Did you know? The sloth can rotate its head almost 270 degrees: a record among animals! Toy developed in collaboration with WWF®. Janod is supporting WWF®™’s efforts to protect the environment and biodiversity with a new range of toys made from more sustainable materials. We hope this range will inspire the next generation and encourage them to stand up for wildlife and the natural world in the future.